Each of the authors featured in Masquerade: Oddly Suited will be posting over the next several weeks. They'll talk a little about writing and the stories they penned for the anthology. The first story up is "Oddly Suited" by L.G. Keltner.

Writing is the process through which we find the story we’re trying to tell. It can be a mystifying experience at times. We don’t always know where we’re going when we start, but that’s part of the adventure. The journey of writing a story begins, of course, with that first spark of inspiration.

With the IWSG Anthology Contest, we’re given a theme. Masquerade. That’s the initial spark of inspiration. Of course, that theme can take a writer in many possible directions. The ideas that spring forth may be heavily influenced by daily life. This was the case for me.

The image that first sprang to my mind was a mask. Yet, instead of the Venetian mask many might think of, I saw an alien mask from a Halloween costume. This likely happened because I started writing around the time I was helping my children select costumes for trick-or-treating.

From there, I had to decide if that image could be worked into a satisfactory story. I needed to tell a story of young love, after all. Could I do that with this concept? I concluded that I could, but I felt a light-hearted and silly tone would work best. Having written fun, quirky stories in the past, I was thrilled about using this tone to tell my story.

We make so many choices to bring our stories to life that it can be difficult to pinpoint them all. It’s the same with my story “Oddly Suited.” Suffice it to say, once I had the costume idea and the tone nailed down, the story came together rather quickly.

This quick little line I came up with sums up the idea behind my story nicely: The silliest situations may be oddly suited for romance.

Ramona enjoys making entertaining videos with her friends and posting them online. She also co-writes the scripts with her crush Adam. Sometimes it’s difficult to keep her feelings hidden, but when Adam’s antics inspire a zany Valentine’s Day video, her task becomes nearly impossible.

Not only does she have to write a fun, romance-themed script with him, she must also play his love interest on camera.

Can she play her role while also masking her true feelings?

The following day, Adam and I sat on the soft burgundy sectional that dominated one corner of his basement. A bag of half-eaten chips resided on the coffee table next to Adam's laptop. Writing sessions required the proper fuel. I reached into my backpack and produced a couple of chocolate bars to add to the bounty.
“Oh, you brought me chocolates!” Adam declared, putting his hand over his heart in dramatic fashion. “So romantic!”
My cheeks burned red, and I silently cursed my pale skin. I promptly turned my attention to the notebook that lay open in front of me. “Actually, I brought them for myself. I might have shared with you if didn't decide to be such a jerk about it.”
Adam stuck out his lower lip. “That was rude. How am I supposed to write an epic, sweeping romance when you're doing everything you can to break my heart?” he said, his face the picture of dejection.
I shook my head, doing my best to suppress a giggle. “Is that what we're writing? Here I was thinking we were trying to come up with some cheesy, moderately amusing drivel. Now I'm feeling the pressure.”
He shrugged. “As artists, we should always try to make great art. People may say it's drivel, but one man's trash is another man's masterpiece. Everyone has an opinion. Mine is simply more correct than everyone else's.”
“I'm glad we got that cleared up,” I said dryly.
“Happy to help,” Adam replied with a smug grin.
“We should get to work so we have something to film, though,” I said. “It can't count as either art or drivel if we never finish it.” 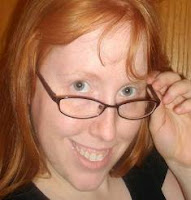 L.G. Keltner has been attempting to write novels since she was six. None of those early attempts were any good, but her passion for writing remained strong. She graduated from Drake University in 2008, and she lives in Iowa with her husband and children. L.G. writes mostly science fiction, though she also enjoys writing humorous young adult stories.

Your silly idea turned out to be quite fun!

I love how this came about. The costume made the story.

I love a sneak peek into our stories! Whee! This is going to be fun. <3

So does the costume in your story relate to the cover? Can't wait to find out!

Very excited for a chance to read more of the story 😃

Thanks! I'm glad I went with the costume idea.

I agree! I'm looking forward to seeing what everyone else decides to share!

I love the excerpt, it sounds like such a fun story. I like how your mind went straight 'out of the box' to the alien mask.