Now it's time for our ninth story spotlight! Let's hear from Anstice Brown and how her story "Sea of Sorrows" came to life!

Writing, like reading, has always been pure escapism for me, which is why I gravitate towards speculative fiction. Writing fantasy and science fiction allows me to explore different belief systems, ancient mythologies, alternative realities and future possibilities. It’s my way of attempting to answer the pesky “what if?” questions that come to me in the middle of night or while I’m taking a shower.

But despite my love of world-building and storytelling, I’ve never had much confidence in my ability as a writer. I never thought anyone would be interested in reading what I affectionately refer to as my “brain vomit”. Being part of the Insecure Writer’s Support group has encouraged me to engage with the writing community and start putting my work out there for the first time.

I started with the faintest hint of an idea; a fleeting, intangible thing that I tried to hold onto long enough to immortalise on paper. A shapeshifter who had never been seen by mortals in her true form. She longed to be released, so I presumed she was som kind of genie at first. But her desperate loneliness kept conjuring a remote Scottish island and a wild, stormy ocean. I fell down a Wikipedia rabbit hole filled with creatures from Scottish mythology like selkies, kelpies and finfolk. Before long, my protagonist shaped herself into a siren named Mairg.

I set my alarm for 5:30 every morning and got up to write before getting ready for work. I knew straight away how the story needed to end, but I had no idea how I was going to get there. I just let the emotions of my main character lead me. She wrote herself into being, refusing to be ignored. I hope you’ll enjoy her story. Excerpt from Sea of Sorrows by Anstice Brown

When I reach the clifftop, I almost weep with relief. I let the sack thud to the ground and my heart stops for a moment, but of course, he won’t wake. I take a moment to gather my strength before dragging his body across the damp grass, my back screaming in protest.
I’ll leave this one in the churchyard. People avoid the place out of fear that the Slaugh will swoop down from the trees and snatch them away. I remove the sack and prop Jamie’s unconscious body up against a headstone, positioning the empty bottles around him.
A flash of movement over by the church door causes me to duck. No, too late, I’m tingling, flickering. My olive skin pales, my voluptuous body stretches and sharpens. I clutch at the soft, flame red curls tickling my neck.
“Who’s there?” a young man shouts. I jump up and hurry back toward[A1]  the steps.
“Wait! Wait! Ailsa?”
I freeze. My heart hammers in my chest, urging me to flee, but the way his voice cracks makes it impossible for me to move. When he reaches me, my gaze fixes on his wild green eyes and he turns whiter than bone, his mouth forming a perfect ‘O’.
“You’re alive!”

A shape-shifting siren named Mairg sets out to reunite a handsome young man named Erik with his missing fiancée, but she soon finds herself falling for him. Will Mairg fight against her own kin to save the girl Erik loves? Or will she embrace her monstrous nature and keep him for herself? 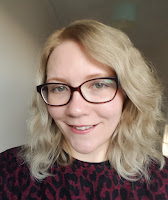 Anstice Brown has had her nose in a book and her head in the clouds for as long as she can remember. A geek/hippie hybrid with a love of all things retro, Anstice enjoys doodling, gaming and raving about books on her blog, Dusting the Soul. She adores speculative fiction and is currently working on a science fantasy novel.

Anstice has a BA in Literature and Philosophy and currently works as a school administrator. She lives on the East coast of England with her wonderful husband, daughter and their mischievous cat, Magical Mr. Mistoffelees.