In the Spotlight: Deniz Bevan ~ Author of "One to Another"

Deniz Bevan on her short story, “One to Another.”
Mine all started with a line from Neil Gaiman, which was to be the start of a fable: "Long ago, in the days when there were still fish in the oceans and cars on the roads, there lived a woman who was not afraid of governments…"

I kept thinking of the line and, oddly enough, I set the story in Montreal after I'd moved away from there. Sometimes when you look back, it's easier to see a place more objectively. I remembered the ice storm of 1998, and that's what led me to imagine The Snow, and to wonder how people might start rebuilding a community from the beginning—by making rules or telling stories?

And that's where the title came from: "One to Another" is a song on Tellin' Stories by The Charlatans.

I love writing short stories because they always seem to come all at once. A few hours of non-stop writing, and there it is! It's been a couple of years now since I had a fresh idea for one and, though I've done NaNoWriMo every year and written other pieces (especially during writers' houseparties onthelitforum.com!), I miss writing short pieces! I'm always eager for new prompts.

What would you do if a storm destroyed the world and you had to rebuild from scratch? Would you be a leader—or oppose those who try to forge ahead? How might the survivors begin—by making rules or telling stories?

Maja was walking on Sherbrooke Street when the storm started, carrying her sleeping baby against her in a linen sling. She raised her hand to cover his head, and a snowflake fell across her knuckles.

It turned orange, sizzled, and burned. She yelped and raised her knuckles to her mouth to suckle-soothe the pain. Yet a heat came off them, and she lowered her hand to her side. She didn’t want to burn her lips, too.

Another snowflake, dainty as crocheted lace, came floating down in front of her face.

It rested on the sidewalk, turned orange, and burned a hole in the paving. Not just on the surface, as it had with her hand; this time the flake bored down until a tidy pothole opened up in the sidewalk.

The snowfall grew thicker. Maja ran for the nearest shelter, wrapping both arms around her baby to keep from jostling him. She wedged her heels into the dirt right up against the trunk of an oak and looked up to ensure that the branches and leaves covered every part of her. As she shushed her baby back to sleep, in her peripheral vision she could see others running, flitting from one side of the street to the other under the pelting snow.

The oak seemed to shudder under the weight of the flakes as they piled up. Every few minutes a branch shivered and the snow, instead of dropping off in a clump, floated off like pollen, then settled elsewhere on the street. In a quarter of an hour, the sidewalk closest to her had become a freshly churned embankment. The road was eaten away.

A young man ran under her tree, arms over his face, and she tightened her hands around the curve of her baby’s body. The man hadn’t seen her, but must have registered her motion, for he skidded to a stop, gave her a wide-eyed glance, then scurried to the other side of the trunk.

Maja hoped her husband had found a tree as protective as hers. 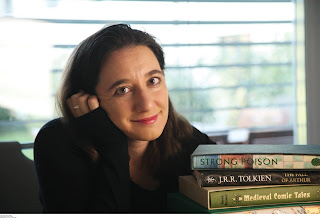 Deniz Bevan has lived and worked in Turkey, and her non-fiction work, including travel articles, book reviews and personal essays, has most recently appeared in the trilingual (English, French, and Turkish) newspaper Bizim Anadolu. Her short story 'Where There's Life' was shortlisted for the Surrey (Canada) International Writers' Conference Storyteller's Award in 2013. Her contemporary romance, Summer Fire is out now with Carina Press. And there’s a playlist for that story, and many others, on her YouTube channel! And her Story Inspirations board on Pinterest features images of all her characters.
A firm believer in burning the candle at both ends, she is generally writing a new novel while editing another, and blogging about her reading and research adventures -- and sharing travel photos – weekly on her blog, The Girdle of Melian. Other days, she tries to stay off the web altogether, as she delves into the history, mystery, and romance of her characters’ lives.
http://thegirdleofmelian.blogspot.com/ & http://simplescarf.blogspot.com/
Coming on Wednesday, April 14, 2021 . . .
Next up will be Charles Kowalski, who shares his backstory for "Resident Alien."
Posted by Stephanie Espinoza Villamor at 3:00 AM