The authors of Dark Matter: Artificial certainly keep busy with their writing! Everyone has different styles and different projects they're working on or have already published! For this week's post our authors responded to the following prompt:

Let's talk about your writing! Share about a current project in the works or a published project readers can look for.

Stephanie Espinoza Villamor: As I continue to write short stories, I'm constantly working on revising a middle grade contemporary novel I've been working on for 10 years. It's an important story about neurodiverse siblings that I want to be able to one day share with the world. Contemporary books for middle school students are a lot different than science fiction stories for adults, but I particularly enjoy writing any genre for kids--including sci-fi! After I wrote "Artificial" for the Insecure Writers Support Group anthology contest, I was inspired to write a middle grade science fiction story called "My Life in Cube 19," which was selected to be in the Henderson District Public Libraries' anthology, Impressions: Isolate.

C.D. Gallant-King: Dark Matter: Artificial is a sci-fi collection, which ties neatly into my current project: Gale Harbour, a series of books about adolescents in small-town 1990s Canada battling other-worldly monsters. It's not hard sci-fi, as it contains touches of fantasy and horror as well, but there's definitely aliens (spoiler!). My best pitch calls it Degrassi High meets Stranger Things. The first book, Psycho Hose Beast From Outer Space, came out last year to moderate success, and book two is in the editing process and should be available this Fall!

Kim Mannix: I'm primarily a poet more than a fiction writer, but I have been working on a collection of short spec/horror fiction for a long time. I recently finished what I hope will be a poetry chapbook, so now I have turned my energy back to the weird stories, like the one that appears in Dark Matter: Artificial. They need to be edited, expanded or started from scratch. Like most writers, especially those that work other jobs, I always have more ideas than time!

Steph Wolmarans: Progress continues on my novel involving the distant descendants of the Artusans and the Utten. They were first introduced during my short story, "The Utten Mission," in the Dark Matter: Artificial anthology. Thousands of years in the future, they will meet again. Sadly, their relationship does not improve. Currently, I am wrapping up the first round of revisions—only a few scenes to go! (Maybe a rewrite for the ending.) Hopefully, it will be going to some beta readers and/or critique partners in the next month or so.

Tara Tyler: I love summer! As a teacher, I have gallons more flexible hours to write than during school. Right now, I'm working on CONDUCTION, book 4 in my Pop Travel techno-thriller series, which write themselves by now, I love those crazy characters! When I write, I jump from project to project: something new, some editing, and usually a short story or two, like last year I was able to write my Dark Matter story and finished my latest UnPrincess novella, GERTRUDE. I also love to catch up on my writerly connections. We'll be starting our chat group again as soon as I figure out the best conduit to use--Look for it!

Deniz Bevan: I have way too many projects in the works! Quite a few finished NaNoWriMo novels that need editing (historical romance), one novel in the process of being queried (contemporary romance), one novella that may be on its way to publication (paranormal romance; fingers crossed!), and one short story collection by another author that I’m copy-editing. On top of that, I just wrote a new short story for the first time in a couple of years! This one is also a post-apocalyptic tale, just like my story in Dark Matter: Artificial, and also for the first time in a long while, I drafted it on pen and paper. Now I need to find time to type it up. It’s great having so many projects on the go so that I can constantly switch to something new!

Charles Kowalski: Before blasting off to a distant world in the future for “Resident Alien,” my first foray into IWSG anthologies took me to a magical version of this world in the equally remote past: seventeenth-century Japan for “Simon Grey and the Yamamba” in last year’s VOYAGERS anthology. The story fit into my novel, SIMON GREY AND THE MARCH OF A HUNDRED GHOSTS. Simon, cursed with the “gift” of seeing the spirit world, signs up as a cabin boy on a ship bound for Japan, hoping that a long sea voyage will provide some respite from the ghosts that always haunt him on land. But when a shipwreck leaves him stranded, only with the help of Yokai – quirky creatures from Japanese folklore – can he find his way home. (The pandemic delayed the release of the sequel, SIMON GREY AND THE CURSE OF THE DRAGON GOD, but it’s in the works!)

Olga Godim: I want to tell you about my current WIP, a novella with no title yet. Like my story for Dark Matter, it is science fiction. It was born, like many of my stories, out of my reading. Months ago, I read the sci-fi novel Polaris Rising by Jessie Mihalik. Before Mihalik’s book starts, the heroine Ada, unwilling to submit to her despotic father’s wishes to marry her off for political gains, runs away. Her father sends bounty hunters after her, and Ada’s struggle to stay free, plus many a fun adventure and a muscled hunk as a love interest, form the bulk of the novel. But Ada’s original escape is outside the pages of the book. That stirred my interest. How did she escape? It is science fiction, so technology is well developed, and everything is on the computers. Is true escape even possible? I started playing with possibilities, and my own heroine Talia sprang up in my head – having nothing in common with Mihalik’s protagonist. Talia also must escape her domineering relative, and her situation is similar to Ada's, but Talia's escape mechanics are the focus of my novella. And after she succeeds, what is she to do? How can she build her new life in a highly technological society while staying hidden from possible searches? Where does she go: a planet, a space station, a spaceship?

Elizabeth Mueller: I’m honored to have another chance to present myself. Thank you! I love to read and write romance. For me, it’s true escapism! and refreshing. From time traveling to dancing with faery princes, to ballerinas and cowboys!

A dangerous creature hunts Damarin through the deserted streets, and he races home with Zarynah in his arms. Isn’t that love? Possibly romantic? Welcome to "Resurgence," my story inside Dark Matter: Artificial.

I admit it’s challenging to write a story without romance and "Resurgence" challenged me a bit but it still bloomed into the story it is now!

Here is the aesthetic I’ve created for your pleasure. Enjoy! 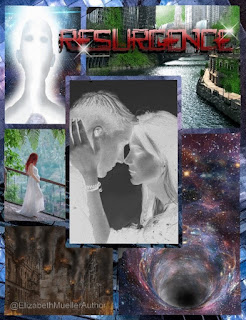 Mark Alpert: If you liked the short stories in the Dark Matter anthology, you’ll probably enjoy my novel Final Theory, an international bestseller that was published by Simon & Schuster and translated into two dozen languages. The novel is about Albert Einstein’s quest to find the holy grail of physics, a Theory of Everything that would explain all the forces of nature. In Final Theory, Einstein succeeds in discovering the mathematical blueprints of the universe, but he’s forced to keep them secret because they would enable the building of weapons even worse than nuclear bombs. Decades later, though, the secret leaks out, and physicists start turning up dead as terrorist mercenaries and FBI agents race to piece together the world-changing formulas. You can read more about the novel on my website — www.markalpert.com — which has excerpts and buy links.
To learn more about all our authors, check out their websites and social media on our bio page!
Coming on Wednesday, June 30, 2021 . . .
Next up our authors share their best writing advice with our readers!
Dark Matter: Artificial is available now on Amazon, Kobo, and Barnes and Noble!
Posted by Stephanie Espinoza Villamor at 3:00 AM