It's time to hear about the next story that will be appearing in the anthology Masquerade: Oddly Suited. Let's hear from C.D. Gallant-King, who will be talking about his story "The Dark Charade."

My reading tastes are pretty varied, so it was inevitable that my writing would be scattered as well. I’ve written fantasy, mysteries, horror. I’ve got some sci-fi and a western in the works. My wife insists that my first book is a romance, and there’s been some debate among reviewers which combination of horror/urban fantasy/dark comedy/thriller properly describes my most recent novel. And that’s not even including all the erotica I write under a pen name. I don’t have a set style or genre I prefer, except that all of my writing tends to skew pretty adult and comedic.

So how the heck did I end up writing a young adult romance for the Masquerade Anthology?

I’ll try anything once. And to be fair, “The Dark Charade” is not a stereotypical young adult romance. It’s not a parody or satire per se, but I do have some fun with it, and it takes some dark turns. I mean, how many YA romance couples spend their first date robbing graves in a cemetery? Actually, I haven’t done that much research, so maybe it’s a common trope? For all I know digging graves is a major set piece in To All the Boys I’ve Loved Before, and my story is just going to come across as tired and derivative.

I’ll risk it. I hope you enjoy “The Dark Charade” and all the other great stories that will be featured in Masquerade: Oddly Suited when in drops in April. I’ve included a little excerpt below, so you can decide in advance how tightly you should clutch your pearls.

Groan. Not another vampire story.

I get it and you’re totally right; vampires are done to death, no pun intended. Madison Reid knows all about vampires, she’s a bit of an aficionado, after all. But she knows they’re not real, and she certainly didn’t expect to find one in the boring, terribly misnamed town of Paradise, Newfoundland.

Then she met Jackson, and her life got turned upside down. She found herself falling for a boy for the first time, but this is no ordinary boy. He’s got creepy pale skin and violet eyes and his family runs the town funeral parlour. It can’t be true, but there’s no other reasonable explanation. Could Madison be falling in love… with a vampire?

I couldn’t believe it. What was I witnessing? This boy, who I had to admit I was starting to crush on hard, was sneaking into a cemetery in the middle of the night and digging up graves? Why was he doing this? His family owned the local funeral parlour. If he needed a body, couldn’t he just, you know, get one from work? Why was he digging up a grave in the middle of the night?

Most importantly: Was I creeped out by this? Or did I find this weirdly exciting?

I watched him for a few minutes. I couldn’t look away. Despite the cool, damp September air, Jackson quickly started to sweat. He took off his grey windbreaker and soon removed his sweatshirt and t-shirt, too. My throat tightened. This beautiful boy, this amazing, gorgeous young man, was stripped to his waist and digging up a grave in the middle of the night, and I was embarrassingly turned on by this. It helped that he was so ripped. His alabaster muscles glistened with sweat in the cool radiance of his flashlight. I would have never guessed it from school and his loose-fitting dress shirts, but he had the arms, shoulders, and chest of a champion swimmer. I could grate cheese on his abs. He must dig a lot of graves to look like that, and I started wondering if I could get a part-time summer job with his family. Digging graves must be a great workout... 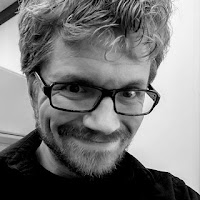 C.D. Gallant-King wrote his first story when he was five years old, and he made his baby-sitter look up how to spell “extra-terrestrial” in the dictionary. He now writes stories about un-heroic people doing generally hilarious things in horrifying worlds. A loving husband and proud father of two wonderful little kids, C.D. was born and raised in Newfoundland and currently resides in Ottawa, Ontario. There was also a ten-year period in between where he tried to make a go of a Theatre career in Toronto, but we don't talk about that.

He’s self-published two novels, Ten Thousand Days in 2015 and Hell Comes to Hogtown in 2016, which was a semi-finalist in Mark Lawrence’s 2018 Self-Published Fantasy Blog Off contest. His work has appeared in the Dancing Lemur Press Anthology Tick Tock: A Stitch in Crime as well as volumes IV through VI of Mystery and Horror’s Strangely Funny series.

I thought your story was brilliant. So was the one in Tick Tock. Obviously, you can write anything.

You have either excellent or terrible taste, I'm not sure which. :-P

I think you might be safe on the grave robbing first date. At least I don't think there was one in When Harry Met Sally.

Sounds like fun, C.D.!!! As I've mentioned before, I'm really looking forward to reading our anthology. The agony of waiting. The torture of these IWSG posts!!!! xD

Oh, I know there's none in When Harry Met Sally, but how many YA romance novels have you read, Alex? Hmmmm?

I know my writing is lousy, but I wouldn't call it a "torture..."

You had me at "champion swimmer build". That's great you write in so many genres! I like variety, too. Looking forward to reading your story, C.D.!

What a great excerpt. You've captured the YA voice so well. It sounds like such a fun story. I think grave robbing dates are going to be the next big thing.

LOL! A little is not enough. :P