Here we are with our next story spotlight! Only three more spotlights to go after this, and the April 30th release day is barely over a month away!

Today we have Carrie-Anne Brownian talking about the fascinating origins of her story "Charleston Masquerade."

When I created the protagonist of my story “Charleston Masquerade” at five or six years old, little did I ever dream she’d one day help me to win a story contest. It just goes to show all events truly are linked together in this best of all possible worlds.

Initially, Jinx was a contemporary girl, and eventually turned into an 18th century character in Colonial South Carolina. Her true name became Marionetta, her little sister became Marilyn, and her future husband became Zed. Around 1992, I shelved them, and didn’t believe I’d ever write those characters again.

In 2012, my mind was pulled back to my 18th and 19th century characters, whom I’d never forgotten in all those years. They went into my queue, with the full intention to eventually return to them.

When I discovered Marionetta and Marilyn weren’t 18th century names, I used the name of the third sister, Labyrinth, to rename them. What if their mother were a passionate Hellenophile who gave all her kids uncommon names from Greek mythology? It perfectly worked out that Jinx comes from Iynx (pronounced like “inks”), an obscure love goddess. Marilyn became Myrina, a queen of the Amazons.

While brainstorming ideas for my Masquerade story, I hit upon the idea of using my 18th century characters, trying them back on for size. I knew I’d made the right decision when the characters and story flowed effortlessly almost immediately, like I’d never been away from them for over a quarter of a century. A masquerade ball felt like a natural setting for 1767 Charleston, and played well with my signature cornerstone of characters who are outside the norm, different from the others, in some way.

These characters were meant to be, since I never forgot them in all these years. It just wasn’t the right time to write them as they deserved to be before.

“Would you care to dance, Miss?”
Jinx looked in the direction of the unfamiliar male voice which spoke in an accent she couldn’t place. It belonged to a very tall masquerader with a golden half-face mask, intense dark eyes and very fine, classical cheekbones. He wore a dark blue velvet coat and breeches, a bright red waistcoat, a white dress shirt and silk stockings, and black leather shoes with diamond-encrusted golden buckles.
“Not until you introduce yourself, Sir.”
“For tonight, you may call me Zed, or Zedekiah. You’d never guess my true name.”
“My name for tonight is Jane Bradford. You’d never guess my true name either.”
Zed leaned closer to her, then drew back. “You don’t look like a plain Jane at all if your eyes are any indication. They have too much personality. Are you part Gypsy or Spanish? Most people of English descent don’t have such dark hair or eyes.”
“Family lore says a great-grandfather on my mother’s side was Greek, though the family Bible records my maternal grandmother as having two English parents.”
“Is that a true story or part of your masquerade?”
“I’m no good at making up elaborate stories on the spur of the moment. My younger sister has a natural talent for that, but I don’t.”
Zed held out his hands, and Jinx clasped them. He led her in a minuet around the large ballroom, or at least what Jinx assumed must be a minuet. Though she’d had basic dance lessons, she had no reason to remember all those interconnected steps. Holding hands and moving one’s feet in harmony with one’s partner seemed a bit dull, not exciting or romantic. High society life was more fun to observe, not actively participate in.
“Are you betrothed?” Zed asked at the conclusion of the minuet. “Or do your parents have someone in mind for you?” 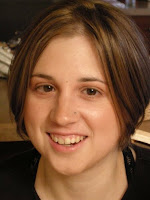 Carrie-Anne Brownian, who also writes as Ursula Hartlein, is a proud native Pittsburgher who lives and breathes all things historical.  She has a degree in history and Russian and East European Studies from UMass–Amherst, and aspires to a Ph.D. in Russian history.  Her stories always feature characters who are outside the norm in some way, and lots of Sturm und Drang.

Glad you saved those characters and came back to them. My first novel was about two characters I created when I was a kid.

It's so cool that you invented your main character all those years ago! Love the names.

Maybe Jinx's parents don't have someone in mind for her, but apparently SHE does!