In the Spotlight: Stephanie Espinoza Villamor ~ Author of "Artificial"

The IWSG Anthology blog will be featuring posts from each of the contributing authors in Dark Matter: Artificial over the next few weeks. We’ve asked them to share a little about how they came up with their stories and preview what’s to come!
Stephanie Espinoza Villamor on her short story, “Artificial.”
I’m beyond thrilled to be included in the IWSG anthology, and honored to have my story in both the title and cover art! While I’ve been writing in a variety of genres since I was a kid, this was my first official science fiction story. Don’t get me wrong, I love sci-fi. But I'm more familiar with children’s fiction, like contemporary middle grade and young adult fantasy. When I saw the genre announced for the IWSG annual anthology contest I thought, “I’m in over my head!” Still, I was committed to participating since I didn’t get a chance the year before--I was busy having a kid of my own! So each night while my son slept I brainstormed science fiction.
Being a librarian who saves everything, the first idea I came up with was an archive. I wanted to explore a future where smartphone data is saved and accessible for posterity—anyone can look up someone’s life and learn from the thousands of pictures stored on their phone. My original protagonist visited this public archive to solve a mystery using clues from such photos. The problem was, I couldn’t figure out who my protagonist was. I got stuck on the details of the mystery. I just couldn’t get “into” the story.
Then one night while Baby snoozed in my lap the idea hit me. What if, instead of an archive, phone data is saved into a person? I’d recently read my friend’s thesis about artificial intelligence and her analysis of a Star Trek: The Next Generation episode, “The Measure of a Man” (about sentient android, Data). I’d also previously played the video game Detroit: Become Human, all about artificially intelligent androids. This type of sci-fi character intrigued me, and suddenly my story fell into place. Best of all, I was excited to tell the story from the AI’s perspective.
“Artificial” explores the purpose of artificial intelligence in society, our human connections, and what makes something “real.”
Blurb:
Bryan’s role as an AI is to help Lina, not befriend her. But as his memories spark questions about the past, he finds himself growing closer to Lina in the present.
Excerpt:
There is nothing but dark.
Then I’m awake in Lina’s living room. I recognize Lina’s apartment from the photos she uploaded to give me a memory. I recognize Lina because her photos come up the most in my mind. Every photo of her face has been tagged with her name, and my technology allows for instant recall from my data storage. I can’t read through all my data at once, but if I’m asked a question or put in a new situation, I can scan through the data to answer, act, or solve problems. That is what an AI is for.
This is what Lina tells me. She says artificial intelligence has come a long way. Her grandmother’s AI was a voice-activated computer that searched its data storage to answer questions. Her mother’s AI had a disembodied voice that could permeate the entire house and access the Internet in under .6 seconds. But I am the next level of smart home, designed to access stored data and online information while looking as welcoming as possible. I am not a cold, disembodied robot. I am a friend.
“So, that is my role,” I say slowly, hearing my own voice for the first time. It is warm, inviting, and almost familiar. “To be your friend.”
“Yes,” Lina says, then quickly shakes her head. “No. Um, that might sound weird to people. An AI is more like...a live-in personal assistant. God knows my life needs some assisting.” 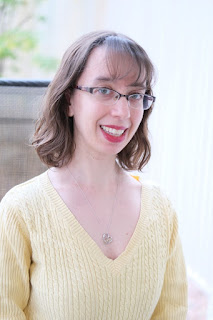 Stephanie Espinoza Villamor is a librarian writer mom who lives with her husband and young son just outside Las Vegas. As a child she wrote her own books on dot matrix printer paper, and later started publishing in school magazines and newspapers. Ultimately, she earned a master's degree in Library and Information Science from San Jose State University, and now works as a college eLearning Librarian. She writes stories inspired by her supportive family and Hispanic heritage, especially for middle grade and young adult readers.
Don't forget that today--Wednesday, January 20--is IWSG Twitter Pitch Day! There's still time to get your tweets out. Complete and polished manuscripts can be pitched via Twitter, just leave room for genre, age, and hashtag: #IWSGPit. If your pitch gets a favorite/heart from a publisher or agent, you can check their submission guidelines and send them your requested query!
Speaking of Twitter, you may be seeing Tweets lately from Dancing Lemur Press promoting each of the stories in Dark Matter: Artificial. The ebook is already available for preorder on Amazon, Kobo, and Barnes and Noble!

Coming on Wednesday, February 3, 2021 . . .
Next up is C.D. Gallant-King, who shares his backstory for “Space Folds and Broomsticks,” about a pair of bumbling siblings in deep space....
Posted by Stephanie Espinoza Villamor at 10:23 AM

I loved hearing about your story and you Stephanie! You may have felt in over your head, but you persisted, and you have the cover honor!!! Way to go, girl! I can't wait to read "Artificial." I also love the "Star Trek" photo of you. I've never been to an ST convention, but maybe Vegas in the future. I have Uhura's uniform, but I have to lose my "Covid 10 lbs" first ~ LOL! You're doing an awesome job on the blog, btw. I wish you tons of success with "Artificial."

P.S. I'm glad to see you are posting on Wednesday. The first Wednesday of the month is especially helpful, because you can get IWSG members visiting.

Thank you so much!! I'm definitely following your lead on the blog--your posts have been so helpful! How cool that you have Uhura's uniform! My dad and I used to go to the ST convention often since we live right outside Las Vegas. Hopefully one day again soon!

Quite the change in direction with the story - but it worked perfectly. And now that I've seen that photo, I know you are a science fiction geek at heart.

You found the perfect angle for a winning story.

Thank you so much Alex and Diane!

This was a great story! I really empathised with the AI characters -- both of them!

Woohoo! Congratulations, Stephanie! Don't you just love it when a story falls into place? I'm excited to read your story!

I just finished my post for next month and came back to read about the other authors. Somehow I missed this one. I just discovered we both had science fiction baby brain. I love it! I also wrote about my son :) Well done on the story and excellent job with the blog!